1. Profile of the research center

Acute diarrheal diseases are the leading cause of morbidity and mortality worldwide. Especially, more than 240,000 children under the age of five die every year in India. The Collaborative Research Center of Okayama University for Infectious Diseases in India (Photo 1 and 2) conducts the hospital-based active surveillance of the diseases in cooperation with the National Institute of Cholera and Enteric Diseases, Kolkata (Photo 3). This surveillance covers a total of 25 microorganisms in order to etiologically understand a wide range of diarrheal pathogens. We are also working for development of an effective oral Shigella vaccine and for understanding the pathogenic mechanisms of diarrheal diseases caused by Vibrio cholerae, enterotoxigenic Escherichia coli and Rotavirus. These studies will contribute to the health and welfare of Indian people and will protect the health of Japanese residents and travelers.

Photo 1 and 2: Collaborative Research Center of Okayama University for Infectious Diseases in India. 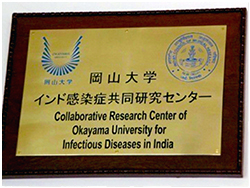 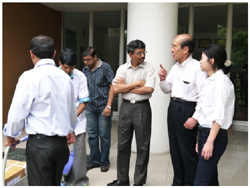 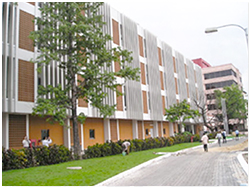 The active surveillance system for 25 microorganisms (15 bacteria, 6 virus, and 4 protozoa) was developed, and the system is applying in 2 major hospitals in Kolkata (B. C. Roy Children Hospital, and West Bengal Infectious Diseases Hospital). The results showed that the most major pathogen was Rotavirus in both hospitals, and Adenovirus, Campylobacter, Giardia and Vibrio cholerae were also highly frequent microorganisms.

Shigellosis caused by Shigella is a serious diarrheal disease in the developing countries including India. The oral rehydration therapy is effective for watery diarrhea such as cholera; however, it is no effective for shigellosis because of the cell-invasive property of Shigella. Since many of the Shigella isolates are unfortunately multi-drug resistance, development of inexpensive Shigella vaccine is very important. The heat-killed vaccine developed showed sufficient protective effect to shigellosis in both guinea pig (Photo 4) and suckling mouse models. Photo 4: The result in the guinea pig model

V. cholerae causing pandemic cholera is believed to be a common bacterium in aquatic environments. However, only a few numbers of the bacterium are isolated from the water samples collected at the cholera endemic area. Existence of VBNC cells, which are not detected by the usual cultivation methods, is thought to cause much lower detection of the bacterium. Conversion of VBNC V. cholerae cells to the culturable cells was achieved by co-cultivation with mammalian intestinal cells (Photo 5). The ecological study of VBNC V. cholerae in aquatic environments is in progress by using this conversion procedure. Photo 5: Conversion of VBNC cells to culturable cells

The ecological study of VBNC V. cholerae in aquatic environments is in progress by using this conversion procedure.

The following 5 studies are carrying out. Namely,

Photo 6 and 7: Scenes of Kolkata 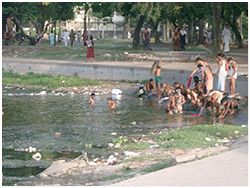 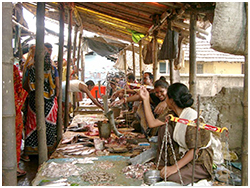